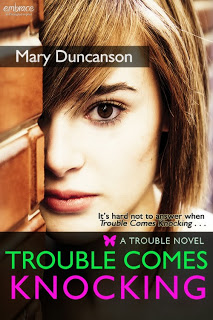 A girl who can’t forget…

Twenty-two-year-old Lucy Carver is like Sherlock Holmes in ballet flats, but her eidetic memory is more albatross than asset, and something she usually keeps hidden. When she notices that something’s amiss at her dead-end job, she jumps at the chance to finally use her ability for good. That is, until, a man is murdered, and she becomes the target of the killer.

A detective on his first case…

Detective Eli Reyes is overbearing, pompous, way too hot for Lucy’s own good, and seems as determined to ruin her relationship with her boyfriend, John, as finding the murderer. He brings Lucy in on the case, thinking she can help him get to the truth, only to cut her loose when he realizes he’s gotten far more than he ever bargained for.

A past that won’t go away…

When memories from her childhood invade her present, Lucy discovers a mystery bigger than she could have imagined. With the killer still after her, and Eli nowhere to be found, she takes things into her own hands, determined to expose the truth no matter what—before trouble comes knocking…again.

Mary Duncanson, who also writes as Mary Malcolm, lives in North Texas with a menagerie of animals and feral roommates. She is currently looking to adopt a husband, preferably housebroken, preferably as silly as her. When she’s not corraling her household, she’s talking to the characters in her head and hoping they talk back. When she’s not doing all that, she can be found wandering around Central Market with a happy, drooly foodie look on her face. Do not judge her, it is her Mecca. Mary’s been writing since she was a teenager though spent quite a few years studying toward becoming a doctor before she realized she wanted to be a full-time author. Unfortunately, the people who own her student loans still want to be paid for the years they supported her medical dreams. Mary lives on a steady diet of coffee and chocolate and believes, like Eleanor Roosevelt, that people should believe in the beauty of their dreams. She also believes people should ignore the word should because really, it’s kind of a judgmental word. Mary dreams of one day living as a full-time, well paid novelist (hint, hint) and also of one day traveling to Chile to pay homage to her soul mate, Pablo Neruda.

Entangled Embrace is Entangled’s New Adult line, launching today with three fantastic books! If you are looking for something new and mesmerizing, embrace the endless possibilities that this brand new Entangled Publishing new adult line offers!

To celebrate the launch of the new line, Entangled Embrace is giving away a Kindle Fire, an iPod Shuffle, and a $25 B&N Giftcard!