Finding Harmony (Katie & Annalise #3)
I loved book 1 and 2. This is the third and final installment for all the cozy mystery fans out there. I liked Katie as the high powered bloody mary drinking lawyer, and I cant tell you how she has grown in this book. The characters on St Marcos are priceless. Having met the voice of St Marcos in person I can picture him speaking and he is awesome by the way. The voice is actually panty melting. I say that here, but I was just staring at him in person. He is a Caribbean dream for sure!

So back to the island. Katie is on alert as usual. She seems nervous about this dead guy showing up at Annalise, but the author has mellowed Katie just a bit in the beginning of this book. She doesnt over think as much as she used to.
This one doesnt disappoint. So if you have not read the first 2 books, then please do it NOW. Nick is just such a character and he really compliments Katie. So this plot is starting out with some shady locals. I just adore the descriptive scenes in here! All hell breaks lose when Nick doesn’t show up after work. There is trouble with the estate and some say that is is a burial ground.  Even when you will be thinking this is creepy, there is a lightness that makes the plot so much more enjoyable. “All the dead men and women dem buried under this house” Holy shit run away and hide right? NOT Katie.

I have to say the opening scene with them looking for a pig is hysterical. The way they catch the big pig is a combo of Lucy and Ethel and maybe Abbott and Costello thrown in there too. Katie knows looking at Nick the pig did have the upper hand! All the while she is thinking about his white polo shirt.
Back is Collin and there is a Tamara. (He met her in Texas) When he admits he is going to get married Katie freakin out goes old school and twists his earlobe. I love her! I loved every aspect of the writing style from the suspense, the humor to the mystery. The story is great, the writing is great, so I say read it now! 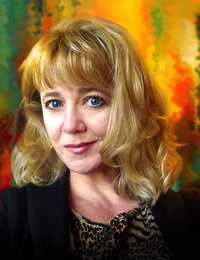 Pamela Fagan Hutchins, a former attorney and native Texan, lived in the U.S. Virgin Islands for nearly ten years. She refuses to admit to taking notes for this novel during that time. If you like Josie Brown or Janet Evanovich, you’re going to love Pamela.
Buy any of Pamela’s books in ebook, audiobook, and paperback now onAmazon, IndieBound, Hastings, BAM!, Barnes and Noble, Audible, Apple iTunes/iBooks and brick and mortar stores everywhere.