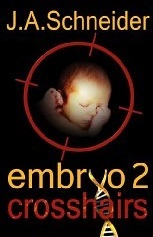 I loved book 1 and I liked this one a lot too. This is not at all a stand a lone novel, Id recommend reading book 1 first then the rest. Sometimes saying the plot was a little scattered in this one, but I thought the plot overall was good and kept with the energy of book one. The criminals and the characters were nicely written.

If you are a fan of medical thrillers this is for you, otherwise I will say a lot of medical terminology will be redundant and not easily understood. If you know a little bit about this background I know the series will be great for you too. What I liked was how the characters can be doctors and also go after the bad guys. I dont know any doctors who can jump and do a roof chase, but I am sure that there are a few. Overall another fast paced book for thriller and mystery lovers.

J.A. (Joyce Anne) Schneider is a former staffer at Newsweek. Words and story ideas are always teeming in her head – “a colorful place!” she says. She’s a wife, mother of two adult children, and loves thrillers, medical thrillers, and mysteries. Once a Liberal Arts major (French and Spanish Literature), she has become increasingly fascinated with medicine and forensic science. Decades of being married to a physician who loves explaining medical concepts and reliving his experiences means that there’ll be medical angles even in “regular” thrillers that she writes.
EMBRYO is her first ebook. Its sequel, EMBRYO 2: CROSSHAIRS, was released in early April 2013. She and her husband live in southern Connecticut.
What created the idea for Embryo?
The idea came like a lightening bolt when hearing a conversation between J.A.’s husband (who did OB before switching to Cardiology), and an Ob/Gyn friend who was excited about IVF and its advances in curing diseases in utero. As an author who had already published fiction and non-fiction, J.A. thought about all human discoveries – from fire to atomic energy – and the fact that they can be either good or very bad if they fall into the wrong hands. It was a thought that wouldn’t let go. GOOD LUCK AND LOVE TO ALL!
Twitter @JoyceSchneider1     Author on Amazon     Facebook     Web     Goodreads
BUY book 1 on Amazon  Book 2 Amazon