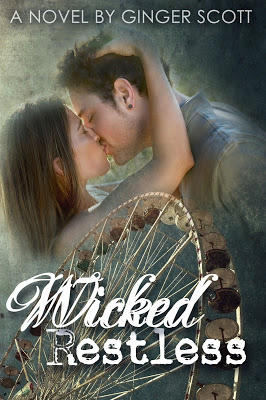 Andrew Harper grew up in a house marked by tragedy. His older brother Owen did his best to shelter him, but you can only be protected from life’s pain for so long. Eventually, you end up just feeling numb…and isolated.

Loneliness was the one constant in Andrew’s life. Until one girl, met by chance in a high school hallway, changed everything. Emma Burke was a mystery and all that was beautiful in this world, the only air Andrew ever wanted to breathe. She took the lonely away, and filled it with hope and color, and Andrew would do anything to keep her safe, happy and whole.

But sometimes, what feels good and right is what ends up hurting us the most. And when Andrew and Emma are faced with an impossible decision, Andrew is tested to see just how far he’s willing to go for the girl who owns his heart.

Scars are left behind.

When Andrew finally gets his chance, in college, five years after his first love broke him completely, he finds out old feelings don’t really disappear just because you say you hate someone. The more he tries to avenge all that he believes he lost, the more he uncovers the real story of what happened years before.

Love is wicked. But a restless heart is never satisfied beating on its own. Can Andrew and Emma make it right before it’s too late, or will the ties that bind them now destroy their only chance at a future?

Book 1 This is Falling

Book 2 You and Everything After

Buy The Girl I was Before on Amazon

Ginger Scott is a writer and journalist from Peoria, Arizona. Her book, “Waiting on the Sidelines,” is a coming-of-age love story that explores the real heartbreak we all feel as we become adults throughout our high school years. The story follows two characters, Nolan (a Tomboy with a baseball player’s name) and Reed (the quarterback she wishes would notice her) as they struggle with peer-pressure, underage drinking, bullying and finding a balance between what your heart wants and what society says you should want — even if you aren’t ready. You can read her book now in Amazon’s kindle store.
Scott has been writing and editing for newspapers, magazines and blogs for more than 15 years. She has told the stories of Olympians, politicians, actors, scientists, cowboys, criminals and towns. For more on her and her work, visit her website at http://www.littlemisswrite.com.