Let’s get to know James!

James was born in the middle of a tropical swamp on the third planet orbiting a distant yellow star. Growing up
the son of a military father meant that books were among the best friends he could have. They traveled with him every time he moved, and took him on adventures that nothing short of a trans-dimensional portal could hope to achieve.

Currently he resides in a place called Utah, on the shores of a dead sea, with his wife and fellow author Molly. His
days are spent catering to the whims of machines that devour people whole, and regurgitate them at distant locations. At other times he is working on his writing. The current projects include continuing the adventures of Ion in the fourth book of the series, adding to his epic fantasy series, and the saga of the Stargate Thieves. 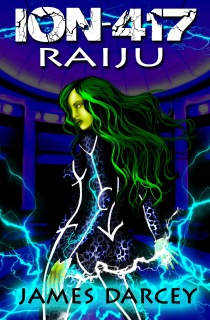 Ion was born and raised in a secluded  world, with only a sadistic doctor and his lizard lackeys for company. Her education came from carefully selected material provided by her tormentor, and the best entertainment was the exercise machine in her small room. It was the
only world she knew.The one thing that made her different than hundreds of others in similar situations, was that Ion held a power within her that was growing stronger week by week. He knew she had the power despite her efforts to hide it from him. He had created her just for that power. He was training her, but for what she didn’t know. The only thing she had going for her was that he didn’t know how strong she was getting. Then by sheer chance, she discovered the truth of her existence. More than just the sinister plans he had for her
future as his mind-wiped assassin. She had family. A family he had stolen from
her.
With this discovery, she made plans of her own. Plans that had her traveling across half
the galaxy in search of her mother’s people. It’s a long and dangerous journey
for an inexperienced girl. How well can she trust her happenstance companions?
What welcome will she find at her journey’s end?
Grab your copy of the book!
Amazon     Smashwords