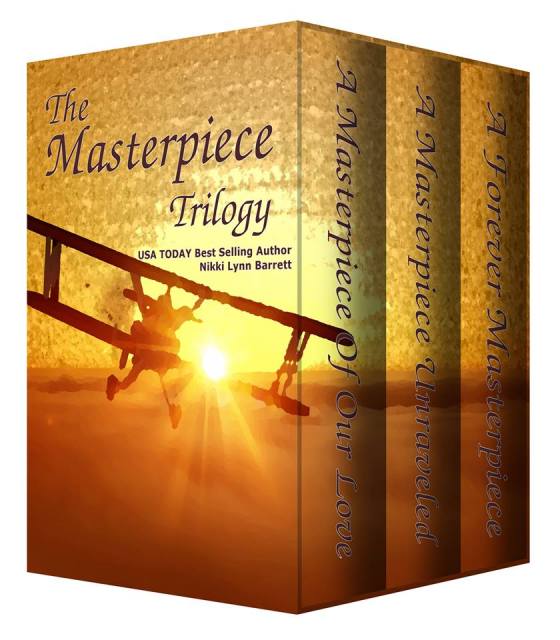 Twenty years ago, they survived a plane crash.
One boy, one girl. He was twelve; she was eight.
A bond forms when all they have is each other and a fight for survival on their hands.
Their story is one of friendship, danger, secrets and terrifying truths. For the first time ever, the Masterpiece Trilogy is bundled up in one boxed set. A Masterpiece Of Our Love, A Masterpiece Unraveled, and A Forever Masterpiece are full of twists, turns, suspense, and a love like no other.
Also included in this set is a new, never before published prequel.

A MASTERPIECE OF OUR LOVE

Hunter followed Becca inside, taking in the sights of her living space. The walls were a plain dull white, but Becca had filled them up with painting after painting, many of which he’d never seen before. Right by the patio door sat a large easel. A beige sectional took up a good amount of space in the living room. “It’s so homey. Very you.” he said, continuing to look around. Why had he never come to see her home before?
“All these paintings… You know I’m going to have to ask again. Why are you not selling these in a gallery somewhere?”
Becca’s cheeks reddened again. She faced him, taking his hands in hers. “You really think I should, don’t you?”
“Well of course.” He pulled her closer, sliding his arms around her waist. “You just wait. You’ll meet people that are going to bow down to your talent. Don’t be surprised if you have a few offers. Then when you’re world famous, I can say with pride that I knew you back when. That I love the most amazing, talented artist on this planet.”
Her eyelashes fluttered and she looked down for a second, then flashed her gaze back to him. “Say that again,” she whispered.
“What? That I knew you back when?” His lips curved up in a grin. He knew exactly what she meant, but had to mess with her anyway.
A MASTERPIECE UNRAVELED

“Becca? What’s going on out here?” Hunter ran down the sidewalk toward them.
“This woman nearly knocked me over and when I try to help, she goes psycho on me as if I’m trying to hurt her. I didn’t do anything to her, man.” The guy took a few steps back.
Hunter knelt beside Becca, checking her over.
“Did he try to hurt you?”
“I didn’t-” the guy started.
Fresh tears in her eyes, Becca shook her head. “I don’t know. I did bump into him, and when he grabbed me I got scared.”
“Come on angel, let’s get inside then.” Hunter held out his hand and helped get her on her feet.
“Crazies always come out at night. If your girl can’t handle the dark don’t let her out of your sight,” the guy snarled, taking off.
She’d done it again. Panicked when nothing was going on. Practically attacked a guy most likely just trying to help, especially when she was the one who ran into him.
Hunter slid an arm around her shoulders. She limped away, her knee throbbing from hitting the ground. Before they went back inside, he stopped her on the patio by touching her shoulders, keeping her in place. “This isn’t good, Bec. You can’t-”
She stepped away from him. “I know. I can’t keep doing that. You think I don’t know this! I don’t want to be jumping all over everyone when they’re innocent bystanders! I hate losing my mind! I’m afraid I’m going to hurt somebody because I can’t stop thinking someone’s going to come after me again! I heard voices, talking about scaring someone. Part of me thought they were talking about me. Is that what you want to know? I’m paranoid. There, I said it.”
Becca left Hunter standing there in shock as she bolted back indoors.
A FOREVER MASTERPIECE

Needing to lighten the mood before his heart broke even more, Hunter took Becca’s hands in his. He gave her a light, mischievous smile. “You know, I never did get to bring a girl in my room to kiss her.” Not at twelve. He hadn’t been interested in girls that way, really. Not yet.
Had Becca been in his room when his parents brought her home? Did they bring her here, even for a while? They had to have before bringing her to the Langes. Hunter tried to picture what baby Becca looked like. Had he been curious about a tiny baby all of a sudden in the house? Did they try to keep her hidden, even from their four year old son? So many questions, and not enough answers.
“So what you’re saying is you wanted to take an innocent girl up to your room and seduce her,” Becca said coyly, fluttering her eyelashes at him. “I don’t know. I’m not that kind of girl. You’ll have to really work your way to get a kiss from me.”
Hunter chuckled, loving that she played along. He pulled her closer, sliding his arms around her waist. “Hard to get, eh? I think I can win you over. I’ve got the skills.”
She tilted her head to the side. “Oh? This I need to see.”
He leaned over and kissed her neck, trailing all the way to her jaw. “You know you want to kiss me. I’m one of your painting inspirations.” He blew air on the nape of her neck. Her fingers dug into his back. “Come on, give a man his wish. Do I have to beg?” 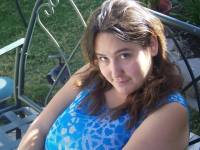 No matter where she goes, USA Today Bestselling author Nikki Lynn Barrett hears voices in her head. Instead of calling her crazy and locking her up, her family realizes it’s just a product of being an author and allows her to write the stories so that the voices shut up.
But they don’t. And probably never will. There’s no need to lock her up, Nikki knows she’ll never escape the voices, not until each and every last story is written. And for every story she writes, about ten or more ideas pop up.
When she isn’t slaving away at her computer writing books that will probably make you cry and keep you in suspense, Nikki plots to take over the world one book at a time. What? It’s a sickness. One she can’t escape!
Books aren’t her only addiction, though. Nikki can be found making up parodies to drive her son crazy, and bantering back and forth with her husband, who somehow manages to steal her away from the fictional world she lives in all the time.
Nikki lives in Arizona with her husband and son, where she can be found using every creativity outlet she can find through music, photography, handcrafted things, and random interests that she may pick up from time to time.
If you want to learn more about the author who makes people cry for a living, check out her website.
Amazon ✯ FaceBook ✯ Facebook: Nikki’s Book Nook ✯ Facebook: Nikki’s Book Stormers ✯ Twitter ✯ Goodreads ✯ Blog