She finds herself hospitalized with no sensation in the lower half of her body
Ella is 26 years old when her world collapses. A traumatic car accident puts an end to the vibrant and optimistic life she lives and forces her to deal with her inability to walk or even feel the lower half of her body.
Ella finds herself confined to the spinal injury ward in a rehabilitation hospital which is turning – unwillingly, into her home. She hates the place because of what it symbolizes, how it looks and smells, but she knows she has no choice. Her long time boy-friend feels like Ella’s paralysis is his fault and cannot handle it. He asks for a break, leaving Ella not only in pain, but also feeling betrayed.
The only thing that keeps Ella going are her friends; the ones who were in her previous life and the new ones she meets at the hospital. One of the new people in her life is Ophir and the spark between them – though exciting, brings more uncertainty to her life.
Ella knows that she has to make some hard choices if she wants to continue living rather than just being alive. 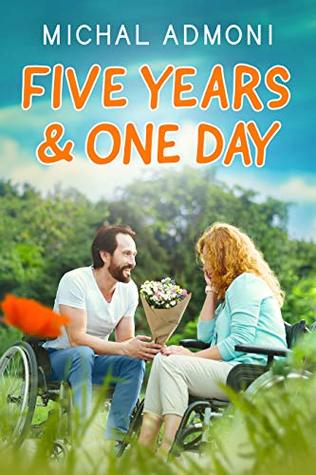 2008 was a rough year for Michal Admoni, who spent months in rehabilitation at the Beit Loewenstein Hospital. She had to cope with not only almost losing her life and being separated from her children – due to her physical state, but also with her mother’s death.
By the end of this horrific year and thanks to an inner process she went through, Admoni realized the significance of this year and decided to devote herself to helping others in similar situations. Admoni decided to study personal and medical coaching, and for two years volunteered as a lecturer on the topic of rehabilitation processes, at the Gal Loewenstein College – a teaching institution.
Today, Admoni and her husband – Doron, live in the Kfar-Aza Kibbutz with their three children – Guy (20), Gali (15), and Lali (32), with Doron’s son from his previous marriage – Ran (31), and their two dogs.
Admoni works as a personal and group life-coach, specializing in the empowerment of rehab patients and inspires others to keep daring while lectures about disability and the strength she discovered inside her.