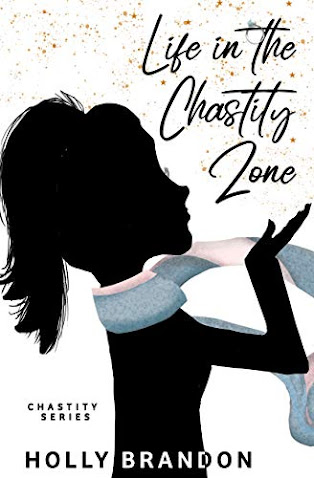 Chastity (Chase) Morgan’s fairytale dreams of everything perfect–career, wedding, marriage, and family–all go by the wayside when her fiancé dumps her for someone else. The thirty-year-old virgin decides to take a trip on the wild side, so to speak, when Roxie, her partner-in-crime cousin, encourages her to get out of her nerdy comfort zone and dive into the world of dating … Roxie-style. It doesn’t help that a nine-year-old psychic relays more information than she can handle. Between the madness and the metaphysical, what unfolds in more bizarre than anything Chase could ever imagine.
Quote from Life in the Chastity Zone
“This whole email courtship is madness. I may be 100 percent cuckoo, but shouldn’t I at least be deliriously happy that he’s flying 5,659 miles to see me, instead of pacing around my room like a nervous wreck? Confession: I’ve been basking in the idea of him. But now that he’s just minutes away from touching down in Los Angeles, and his name doesn’t start with L, I have this gnawing intuitive feeling that something’s not quite kosher. It’s like that funny feeling you get when you get scared, and your hair on your arms stands on end.”

Holly Brandon is an engineer-turned fiction writer. With a lifetime of adventurous love stories, Brandon began her series of books based on real-life experiences. Brandon holds a Ph.D., M.S., and B.S. in Civil Engineering from UCLA and USC. Prior to her fiction novels, she was best known for her published works in the Journal of Earthquakes, Earthquake Engineering, and Engineering Vibrations and Earthquake Science. When she isn’t writing, Brandon enjoys tennis, golf, reading, and spending time with family and friends. A Los Angeles based fiction writer, Holly has won several accolades and awards that contribute to her success.

Upon completion of her second book of the series entitled, “Nothing’s As It Seems”, Brandon continues to regale readers with Chastity Morgan’s often-zany adventures. Unbelievable as it may appear, many of the scenes in “Life in the Chastity Zone” and “Nothing’s As It Seems” are based on true-life experiences. Holly invites readers to follow Chastity on her crazy and hilarious adventures in her search for love and happiness.