Not new but GREAT

Need a break from reading? Listen to a Podcast! The best podcast of the week, heck the month, award goes to Small Town Murder. On another positive note there is a lot of Crime in Sports and Small Town Murder for fans that dont want any bullshit and nonsense.  I also picked up Invisible Choir and there is a lot there to listen to. The host is pretty good, speaks well, and he tells the stories good.

What I love is the comedy. James and Jimmy make me lose all composure a few times an episode. The extra Patreon feed is the best! Extras include The Prisoner Dating Game, Reviews and Bonus episodes. This is how it goes- James reads the prison profiles and Jimmy needs to make his pick for a “date” it is always hilarious! When he finds out why they are in prison and for how long, you will just die laughing! The Google reviews they read are off the charts. Nothing better than reading what people say when posting a review of where they live.

I love to listen but never while walking or at the gym. I have on several occasions stopped in my tracks and just laughed. Several times people thought I was high. I do wear my favorite soft Shut Up and Give Me Murder tee a lot. I also discovered recently that they expanded and have some nice beach towels, magnet and an insulated coffee cup that says “You Sir May Fuck Off”, I did buy that. 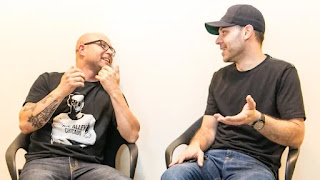 If you like murder and comedy, then give these two a try. If anyone can make you smile while listening to a homicide, it is James and Jimmy. Every few months they also do a live show. It’s great entertainment. The live show has the duo in a setting with a huge screen so you can see the research. The pictures of the actual people involved are usually pretty hilarious. It is live for like 3 days after if you cant watch it live, but you should because other people are allowed to comment. The comments are equally entertaining. Please give a listen! Preview