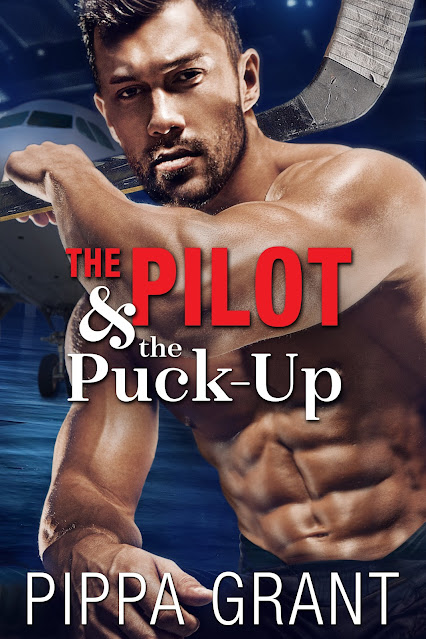 THE PILOT & THE PUCK UP

He’s the biggest, baddest, most spider-fearing motherpucker on the ice…
When you’re named after the king of the gods, the world expects certain things of you.
Tough? Damn right.
Smart? Don’t let the hockey uniform fool you.
Large and in charge? Honey, I’m the biggest, baddest, mother pucking-est machine to ever own the ice. I shoot. I score. In and out of the rink. I don’t come early, but I come often, if you know what I mean. And I always leave the ladies wanting more.
Until that chick last night.
I’m no one-thrust wonder, and you’re damn right I’m going to prove to her I can do better. But every time I think I’m finally on my way back into her pants, she one-ups and out-balls me.
I should cut my losses, lick my wounds, and walk away.
But Zeus Berger doesn’t walk away from anything.
Especially when she’s the only woman in the world who might be able to handle me.
The Pilot and the Puck-Up is a standalone romantic comedy featuring a hockey player whose ego is the only thing bigger than his shoe size, the most badass woman to ever fly a plane, rubber chockey (don’t ask), and no cheating or cliffhangers. 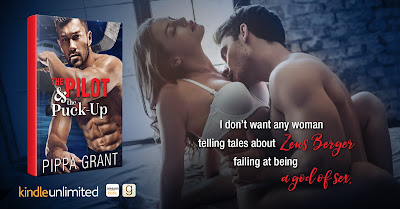 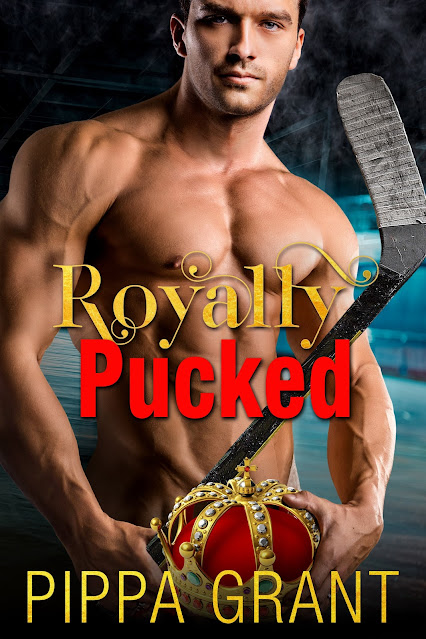 ROYALLY PUCKED
A hockey-playing prince, a most improper lady, and one accidental pregnancy…
When you’re an heir so spare that getting attacked by a shark is more likely than you ever wearing the crown, you’re only allowed certain liberties. Yet still, those liberties can bite you in the ass.
Good thing I’m such a charming devil.
Even then, I’ve been banished to America for a year under the pretense of playing professional hockey while my father cleans up my latest mess. But trouble follows me wherever I go. Generally trouble of the beautiful female variety, and Gracie Diamonte is no exception. Or possibly, she’s the best exception.
Until the dinosaur suit. The cookie incident. And the accidental pregnancy.
Of course I’ll do the right thing.
Just as soon as I solve that pesky problem of my royal betrothal.
I’m about to be the biggest scandal to rock my country and there’s a good chance my father may throw me to the sharks after all. The funny thing is I’ve heard that raising children may not be so different from swimming with the sharks. So no matter how you look at things I am Royally Pucked.
Royally Pucked is a hilariously wrong romance between a spare heir and the lady least likely to ever wear a princess crown, complete with dirty cookies, an emotional support monkey, and lots of pucking around. This romantic comedy stands alone with no cheating, cliffhangers and ends happily with a family of…more than two.
ADD TO GOODREADS 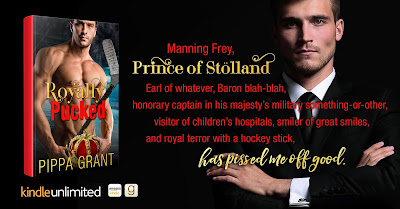 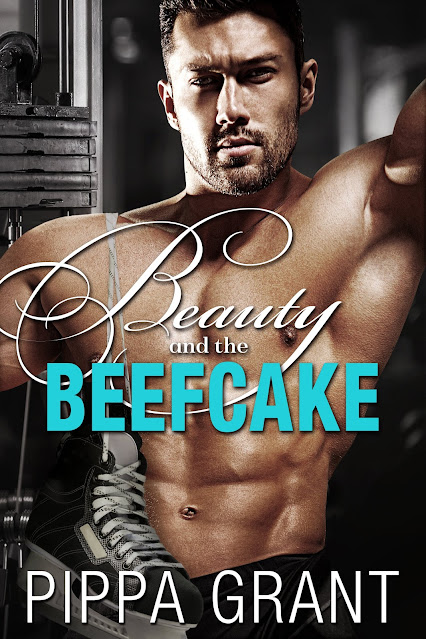 BEAUTY AND THE BEEFCAKE
There are two kinds of women in the world – those I can bang, and those I can’t.
My teammate’s sister?
She’s a can’t.
I moved in with her to protect her from a nasty ex, not to be the next guy in line.
She’s the brains.
I’m the brawn.
She’s the fruit.
I’m the sausage.
She talks too much.
I don’t talk at all, if I don’t have to.
Should be easy to resist her.
But every minute I spend with Felicity is another minute she gets under my skin. She makes me feel like something more than a dumb puckhead with a big Zamboni pony. And it’s getting harder to remember why I need to keep my hands to myself.
Beauty and the Beefcake is a vegan-friendly standalone romantic comedy featuring a hockey player whose vocabulary is the only thing smaller than a hockey puck, a book smart but aimless ventriloquist with too many voices in her head, a dilapidated old house that may or may not be haunted, and no cheating or cliffhangers.
ADD TO GOODREADS 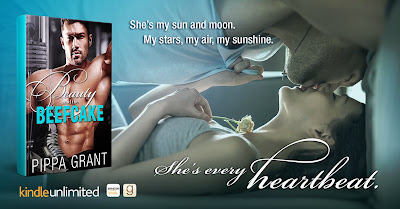 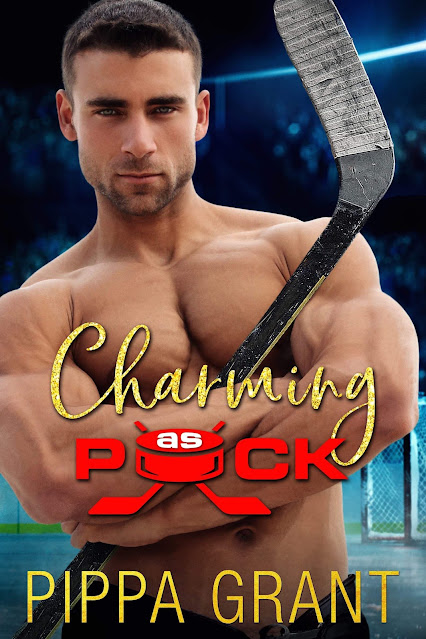 CHARMING AS PUCK
The man could charm the panties off a nun…
Nick Murphy. Hockey god. My best friend’s big brother. My friend-with-mindblowing-benefits. The best thing to happen to my nether regions since my subscription to the toy of the month club. The man I’ve been secretly in love with for years.
And total ass.
I am so done with him.
Except there’s one small problem.
Now that I’ve cut him off, his hockey game is in the toilet. He’s convinced I’m his good luck charm, and he wants me back. But only for his game.
I’ll be strong. I will. I’ll resist.
Asses don’t change their stripes.
Or do they?
This plan would be so easy if the man wasn’t Charming as Puck…
Charming as Puck is a romping fun romance between a hockey player and his sister’s best friend, complete with farm animals, epic birthday presents, and Berger Twin sightings. This romantic comedy stands alone with no cheating or cliffhangers and ends with a pucking awesome happily ever after.
ADD TO GOODREADS 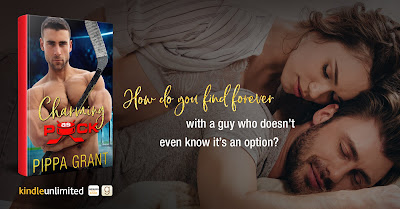 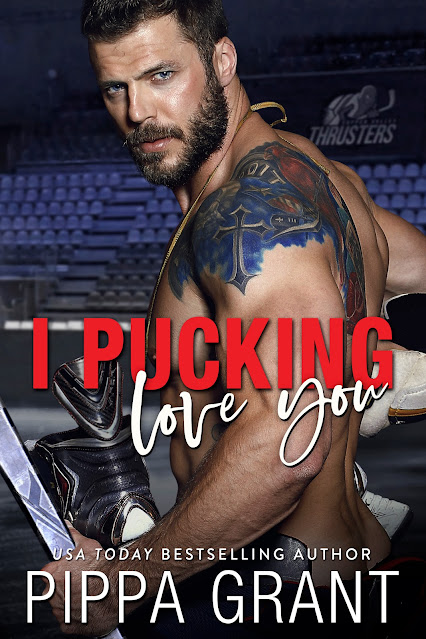 I PUCKING LOVE YOU
You know those stories where an adorably misunderstood clumsy girl needs a fake date to a wedding so she asks her brother’s best friend and they accidentally fall in love?
I wish that was the kind of life I lead, but it’s not.
I don’t need a date to a wedding. I need a date to a funeral.
Clumsy sometimes fits, but then, that’s true for all of us, right? But adorable? No. Misunderstood? Nope again. I’m just your average girl, standing in front of a funeral invitation, asking it to be a winning lottery ticket instead.
And I don’t have a brother, or a best friend with a brother available, which means I’m stuck with Tyler Jaeger.
Sure, he’s a professional hockey player who also knows advanced calculus, but let’s say we’re not compatible and leave it at that. I should know. I am a matchmaker.
Not a very good one, but that’s beside the point.
I know a mismatch when I see one.
Still, Tyler’s what I’ve got, and I am not going to this funeral solo, so he’s what I’ll take.
After all—what could go wrong at a funeral?
I Pucking Love You is a hilariously wrong romantic comedy about the world’s worst matchmaker, a hockey player with a problem he doesn’t want to talk about, and an awkward date-of-convenience that everyone would prefer to forget. It comes complete with a cat working his way through his nine lives, all the sexy times, fish and chips, and a swoony happily-ever-after.
ADD TO GOODREADS 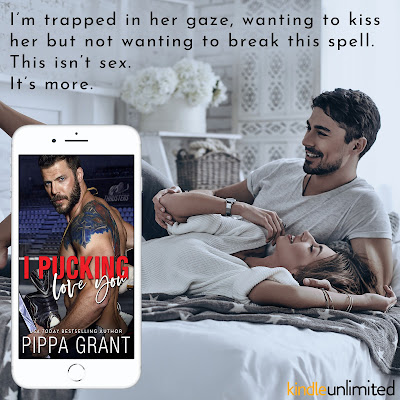 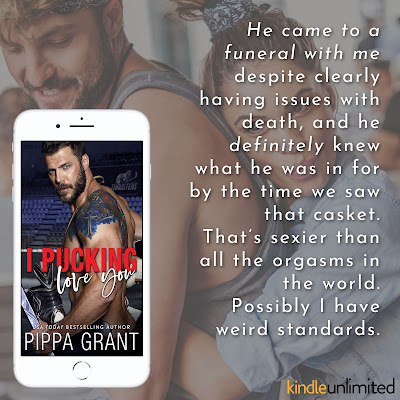 Pippa Grant is a USA Today Bestselling author who writes romantic comedies that will make tears run down your leg. When she’s not reading, writing or sleeping, she’s being crowned employee of the month as a stay-at-home mom and housewife trying to prepare her adorable demon spawn to be productive members of society, all the while fantasizing about long walks on the beach with hot chocolate chip cookies.
AUTHOR LINKS
FACEBOOK
FACEBOOK GROUP
TWITTER
GOODREADS
BOOKBUB
WEBSITE
INSTAGRAM
VERVE ROMANCE
TIKTOK